Apple's announcing a new iPhone. Guess what their stock is gonna do. Part 3. 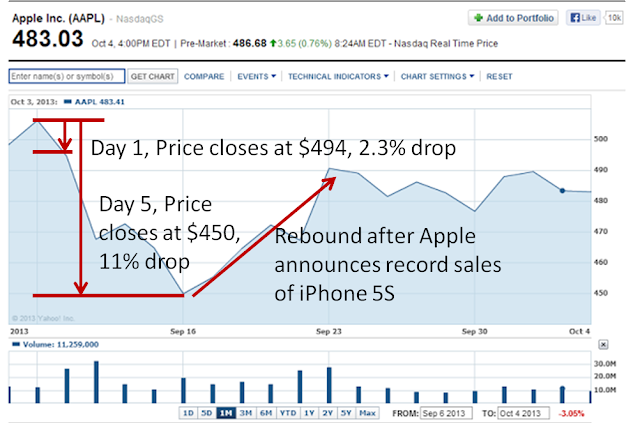 In part 1, we took a look at Apple stock the day before the unveiling of the iPhone 5S and iPhone 5C.  Looking at historic unveilings, we predicted that in the 15 days following the unveil, it's likely that Apple Stock would fall by at least 5%.  Part 2 of the post showed that the stock price fell 3.4% within 30 minutes of the end of presentation Apple held for the unveiling.  But, we wanted to see if the drop did indeed hit the 5% mark over the next 15 days.  A lot happened in those 15 days!  Let's take a look.


Wall Street, apparently, did not like the new iPhones much at all.  Amid knee-jerk reactions of the 5S being a non-update (new camera features, new colors, fingerprint security and next generation processor were not enough), and the plastic 5C being a massive departure from Apple's traditional top-of-the-line philosophy, the 3.4% drop we saw the day after the announcement turned into an 11% drop five days later.  Way below our predicted 5% threshold.

The event that drove the price to such low levels was Apple's delayed announcement of pre-sales.  Typically, with a new unveil, Apple will wait a few days to reveal to the Street how many millions of iPhones have been pre-ordered.  That didn't happen this time for a few days longer than expected.  Fears that the 5S was indeed a dud, and everyone was holding off till the much rumored 6" screen iPhone 6, push the stock lower and lower.

But then, as is so often the case, things turned around.  Lines formed at the Apple Stores across the country.  Apple revealed they had completely run out of iPhone 5Ss till October from their online store.  Demand was, indeed, solid, and even record-breaking.  The characteristic rebound actually started earlier than normal, and stock climbed to the mid $490s yet again.

Now, Apple stock seems to have settled into a range of $485-$495.  Hard to call what will happen until the next unveil, which'll probably be in another year.  There's quarterly earnings announcements, the big world-wide developer conference (WWDC), and so much more exciting stuff to anticipate and trade.  Stay tuned.

Note - The foregoing stock analysis is  solely an assessment of historical data.  The analysis does not represent opinions on whether to buy, sell or hold shares of a particular stock.  Investors should be cautious about any and all stock recommendations and should consider the source of any advice on stock selection. Various factors, including personal or corporate ownership, may influence or factor into an expert's stock analysis or opinion.  All investors are advised to conduct their own independent research into individual stocks before making a purchase decision. In addition, investors are advised that past stock performance is no guarantee of future price appreciation.
Email ThisBlogThis!Share to TwitterShare to FacebookShare to Pinterest
Labels: Consumer, HWYDFrontpage