On Thursday, celebrate Diwali at Cardamom Hill and have some of the best Southern Indian cuisine in town.  Start the day with a Dahl omelet you make at home.  Then, go to Dr. Bombay's Underwater Tea Party and catch up on your reading.  Lunch at Planet Bombay.  Finish off the day with Cardamom Hill. Happy Diwali everybody!

Diwali is the Hindu 5 day celebration of multiple events.  From Wikipedia,

"The festival starts with Dhanteras on which most Indian business communities begin their financial year. The second day of the festival is called the Naraka Chaturdasi. Amavasya, the third day of Diwali, marks the worship of Lakshmi, the goddess of wealth. The fourth day of Diwali is known as Kartika Shudda Padyami. The fifth day is referred to as Yama Dvitiya (also called Bhai Dooj), and on this day sisters invite their brothers to their homes."

In a style only "The Office" could give us, check out Michael Scott's tribute!

In 2012, Diwali is November 13-17.  That makes Thursday the third day of Diwali.  Here's What You Do says you should celebrate in style.  Go sample some of the best Indian food in town at Cardamom Hill.  Asha Gomez is the creative and dynamic leader of this critically acclaimed restaurant over in Berkeley Heights.  From their site:


"Asha Gomez was born in Kerala, the southwestern-most state of India that resides on what was formerly known as the Malabar Coast. The area’s unique and multilayered culture, a result of its vital position on the ancient spice routes between Europe and Asia, provides much of the inspiration for Asha’s enterprises. The centuries of vibrant trade brought Portuguese, English, Dutch, and Chinese influences, and Christian, Jewish, Muslim, and Buddhist religions alongside the indigenous Hindu communities. Asha grew up in a shared household where her mother and three sisters spent much of their day in the kitchen, preparing the regional dishes that arose from their Roman Catholic background (whose origins derive from Portuguese colonists, thus the family’s last name). The heritage doesn’t forbid any seafood or meat in the diet—slow-simmered beef curries, fish from nearby waters roasted in banana leaves, shrimp cooked in fresh coconut milk, and garlicky pork vindaloo tinged with vinegar are common specialties."

Asha brings all the magic of Kerala to Cardamom Hill.  Make a reservation and give it a try.  Have the Kerala Fried Chicken, which is becoming legend.

Here's the full menu below.


“Recreating the amazing food memories of my childhood in Kerala is my true calling. I'm excited about sharing the traditional dishes I grew up enjoying with a broader audience.”
-Asha

Pork Vindaloo (9)
A reflection of Kerala's Portuguese influences: Pork shoulder slow-cooked in a vinegar-tinged sauce, served with an appam (a rice cake)

Kerala-Style Fried Chicken (19)
A dish as beloved in South India as in the American South, served over vegetable pilau.

Braised Short Ribs (28)
Tender ribs in a smooth roasted coconut sauce over upma, a polenta-like dish made from semolina.

Roasted Fish of the Day (MRKT)
Seasonal fish rubbed with mild masala (spice) paste and roasted in banana leaf, topped with coconut curry sauce and served with a side of cardamom scented plantains

Kerala Roast Duck (20; Two Legs 29)
Served with roasted potatoes in a clove and black pepper sauce and a mango-tomato chutney

Beef Biryani for Two (36)
Kerala's answer to paella; beef simmered in spiced basmati rice and served with an array of traditional accompaniments

Vegetable Biryani for Two (26)
Fresh local vegetables simmered in spiced basmati rice and served with an array of traditional accompaniments.


Here's what you do Thursday

First:  Breakfast at home.  Make an Indian Breakfast.  Actually, maybe a little fusion.  A while back we recommended a Dahl omelet.  Either prepare your own Dahl, or get some from a place like Planet Bombay - see below.  Make a Julia Child inspired omelet and stuff it with Dahl.  Pair it up with some Chai.  Makes a wonderful breakfast. $10 for ingredients.
Second:  Take in a read.  Go to Dr. Bombay's Underwater Tea Party over in Candler Park.  This is Katrell Christie's place.  A tea house she always dreamed of having.  It's homey.  It's neighborhood.  It's jam packed with book shelves covered with books donated by the Candler Park community.  Donate 50 cents per book.  It all goes to Mary Lin elementary school around the corner.  Have a cup of darjeeling, pick a couch, and enjoy.   $5 for tea and $1 for a book. 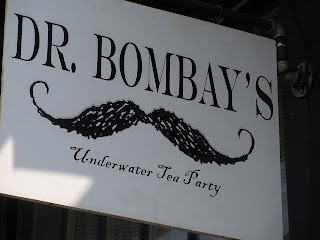 BTW, Katrell founded a group called the Learning Tea, which raises funds to run an house in India where orphaned girls make their home and pursue their education.   We covered the monthly dinners the Learning Tea hosts to support the project a while back.  Check it out.
Third:  Lunch. Planet Bombay is tucked into Moreland Avenue in Little 5 Points.  They bring all the flavors you're hoping for.  Garlic Naan.  Dahl.  The tandoori chicken is great.  Try the Ox-tail lunch, or the goat if you're feeling adventurous.  It's all good baby.  ($10 per person).
Fourth:  Nap time.  A little relaxation will do you well.
Finally:  Cardamom Hill.  Celebrate Diwali in style!  $50 per person.

Carbon Footprint:
Today's full day plan can take up to about 14 miles of driving, if your home base is midtown Atlanta.  The 14 miles  equates to about 10 pound of carbon dioxide, or the carbon sequestered by about 3 sq feet of forest.  Calculations are based on the U.S. EPA's green house gas equivalencies calculator.

14 miles of driving
10 pounds of carbon dioxide
3 square feet of forest would be required to sequester this carbon.