So, it's time to give back a little on Wednesday.  Volunteer at Furkids.  It's the best couple of hours per week of work you'll ever do.  Actually, it's not even really work, just fun.  Whether you like cats or dogs, or just want to help out in the Thrift store, Furkids can find you a way to help.  From Furkids:

"Furkids was founded in 2002 by Samantha Shelton after she found a stray mother cat with kittens and was unable to find a shelter that would take them in. She was spurred to action because of the challenging pet overpopulation problem that exists in Georgia. Today, Furkids is proud of the following facts:
Here's Sam.  She's one of those awesome Atlantans we keep telling you about!


To volunteer, go to their site here, and fill out the online application.  They'll contact you and organize a schedule that will work for you.  It's such a feeling of satisfaction, and you have so much!

Here's what you do on Wednesday:

First:  Have breakfast at home today.  Steel cut oatmeal is good for you and good to you.  Try out Alton Brown's recipe. Alton is an Atlanta local, you know?  His highly informative shows on the food network get us in touch with our inner chemist/chef.  According to Wikipedia:

"Steel-cut oats are whole grain groats (the inner portion of the oat kernel) which have been cut into pieces. They are commonly used in Scotland and Ireland to makeporridge, whereas rolled oats are used in England, other English-speaking countries, and Scandinavia. They are sometimes named after the grade of cut, e.g.pinhead oats; steel-cut oats from Ireland are sometimes called Irish oats."

By all accounts, a healthy breakfast, round it out with fresh blueberries and raspberries, and a cup of hot Twinings Irish breakfast tea.  Dress the tea with milk and sugar to taste.  ($ - $5 per person)

Second: It's time to pick up a new book.  To follow on our classic reading recommendations, pick up a copy of Catcher in the Rye.  It's legendary.  Check this out from Wikipedia:


"The Catcher in the Rye is a 1951 novel by J. D. Salinger.[3] Originally published for adults, it has since become popular with adolescent readers for its themes of teenage confusion, angst, alienation,[4] and rebellion.[5] It has been translated into almost all of the world's major languages.[6] Around 250,000 copies are sold each year, with total sales of more than 65 million books.[7] The novel's protagonist and antihero, Holden Caulfield, has become an icon for teenage rebellion.[8]

The novel was included on Time's 2005 list of the 100 best English-language novels written since 1923,[9] and it was named by Modern Library and its readers as one of the 100 best English-language novels of the 20th century. It has been frequently challenged in the United States and other countries for its liberal use of profanity and portrayal of sexuality.[10][11][12] It also deals with complex issues of identity, belonging, connection, and alienation."

Good stuff my friends.  Paperbacks are $7 on Amazon.  But, just go get a copy at Barnes and Noble and sit in one of their comfy chairs, and start reading.


Third:  Time to volunteer at Furkids.  Put down Catcher for a sec and fill out that application.  It's gonna be fun!

Fourth:  Lunch time.  Wednesday is a great day for a sandwich.  That can only mean one thing.  Victory!!  Try out Victory Sandwich Bar in Inman Park.  It's just the ticket.   Have a Castro, or the Beeter.  And you know what?  Go ahead and have PBR.  They're $2.5 of canny goodness.  That'll take ya back.  You come out of it for just $6.5.  Not bad folks. 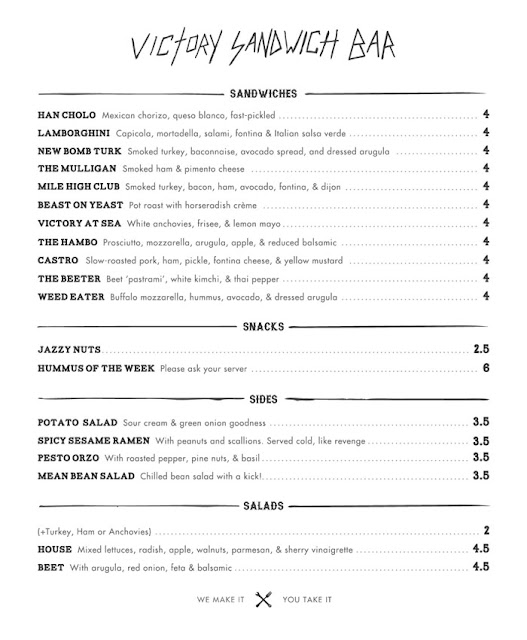 Fifth:  You've read, volunteered, and had a sandwich.  What else is there to do but take a nap?  Enjoy.

Sixth:  Ok.  Switchin' gears for dinner my friends.  Once upon a time, there used to be this restaurant in Decatur called Watershed.  They were known for their fried chicken.  And, I mean KNOWN.  Check out this link from the Food Network.  That's right, one of America's top 10 comfort foods.  Soaked in buttermilk for two days.  Fried in lard.  The whole deal.  Served with mashed potatoes and green beans.  Melt in your mouth.

Then, Watershed disappeared.  One day it was there.  Then it was gone.  Everyone was sad.

But guess what? Watershed is back my friends.  And so is the chicken!  It's only on Wednesday nights.  And it's in their new location on Peachtree, but it's back.  Make an early reservation and tell them to hold some chicken for you.  It goes fast.  Go find out what this fairytale is talkin' about!  $40 per person with wine, etc. etc.


Finally: Billed as an Atlanta Love story, What I learned in Paris takes us back to 1973, when Mini skirts and bell bottoms were on sale downtown for $8.87. Stevie Wonder was on the radio singing "Livin' for the City." And change was in the air from Buckhead to Butler Street. This sparkling new romantic comedy weaves a tale of passion and politics that could only happen in Atlanta. A world premiere by Pearl Cleage.  The show is playing at the Alliance Theatre, and tickets are $40.  Starts at 7:30, so do Watershed early.

View Furkids in a larger map
Email ThisBlogThis!Share to TwitterShare to FacebookShare to Pinterest